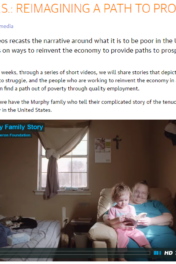 The first chapter from the short film “Poor U.S.: Reimagining a Path to Prosperity” launches with the account of one family’s struggle to break out of poverty

A series of videos from the Heron Foundation and Human Pictures recasts the narrative around what it is to be poor in the United States; focuses on ways to reinvent the economy to provide paths to prosperity

New York — DECEMBER 5, 2016 – The Heron Foundation today launched the first chapter from its short film “Poor U.S.: Reimagining a Path to Prosperity,” a video series that illustrates the reality of American poverty and calls for economic reinvention as the pathway to economic security. The full film will be released in January 2017.

Chapter One, “The Hidden Poor,” is an intimate, first-person account of the Murphy family’s struggle to make it in a broken economy. The short documentary challenges traditional myths around what it is to be poor in America and sheds light on the structural nature of current day U.S. poverty.

Subsequent chapters include interviews with a variety of economic and market influencers – activists, educators, investors, philanthropists and corporate executives – all sharing actionable steps to change the economic status quo that will help people and communities help themselves out of poverty:

Chapter Two: When the Poor are Not at the Table

Linda Tirado, essayist and activist, discusses why “it sucks to be poor” and work in the United States.

“We have poverty hearings on the Hill about welfare programs and these people don’t know how the programs work, they don’t know how our lives work and none of us are at the table to tell them.” – Linda Tirado

MIT business professor, Zeynep Ton, explains the value of investing in employees and how good jobs can be profitable for employers.

“Customers votes with your wallets…investors put pressure on companies, invest in those that are taking care of their employees and that way that makes sense for their business.” – Zeynep Ton, Professor, MIT Sloan School of Management

Chapter Four – Employing the Most Vulnerable

National Organization on Disability President Carol Glazer and Jacob Waltuck, who has autism, discuss the importance of giving people with disabilities the opportunity to be gainfully employed.

“There’s something for everybody to do in our economy and our economy has a use and a benefit for what everybody can bring to it.” – Carol Glazer, President, National Organization on Disability (NOD)

Chapter Five – Not Just a Quantity of Jobs, but a Quality of Jobs

Nancy Pfund, Founder and Managing Partner, DBL Partners discusses the role that investment firms can play to bring the benefits of the economy to neighborhoods that have historically not had them.

“The way that venture capital can play a role is to bring the benefits of the entrepreneurial economy to neighborhoods that have historically not had them. Those benefits include not just a quantity of jobs but they are a quality of job, as well. – Nancy Pfund, Founder and Managing Partner, DBL Partners

“This film couldn’t be more timely or urgent,” said Toni Johnson, Vice President of Knowledge and Influence for Heron. “We like to believe that it’s common for a person in the U.S. if born poor, to work hard and become wealthy. However, not only does our country have 46 million people living in poverty, and 70 percent of people raised at the bottom of the income ladder never achieve the prosperity of the middle. This film give a voice to those very people and calls on business, policy makers and consumers – everyone – to reinvent the economy as we know it to create a more prosperous society.”

The film was produced by Human Pictures, which is “committed to work exclusively on projects that contributed to the struggle for justice and social change, striving always to create truly complex work; and embracing complexity above notions of objectivity and neutrality.” Viewers are invited to participate in the reinvention by using #economicreinvention, and #untoldstory on social media, and can learn more at https://www.heron.org/economicreinvention.

The mission of the Heron Foundation is to help people and places help themselves out of poverty. The philanthropy deploys all its capital to achieving this mission, aspiring to an inclusive economy that serves everyone. Learn more at https://www.heron.org